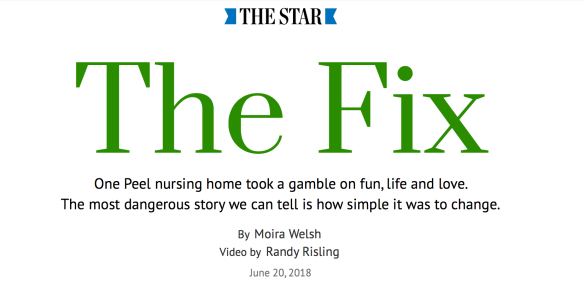 Kenroy Foxe leaves his basement apartment in north Brampton, hops into his beat-up Honda and drives south for an afternoon shift at the nursing home where he will inevitably get punched in the head.

Kenroy is tired of being a human punching bag, taking jabs from residents. It’s a job hazard, for sure, but as he weaves his car through traffic, Kenroy starts thinking about the visiting dementia guru from England. His ideas seemed subversive at first but now Kenroy wonders, could they work?

By the time he arrives at the dementia unit, Kenroy has a plan for Fred, the 89-year-old whose fists hit hard. Kenroy does something that could get him fired in another home. It works so well that word of his success grabs the attention of the home’s senior medical director, upending his long-held notions of care.

Kenroy’s epiphany is one of hundreds of small but momentous changes inside the Redstone unit at Peel Region’s Malton Village long-term care home. They could transform the way Ontario cares for its aging population, proving that a warm, lively nursing home is not that difficult to create.

Odds are that anyone of a certain age with serious cognitive or medical decline will end up in long-term care.

Ontario’s 630 homes are controlled by 300 provincial regulations that keep staff focused on the tasks of feeding, scheduling and cleaning, all documented for government collection. It’s a detached, antiseptic end to life. Some call it a culture of malignancy. It is the not-so-distant destination for the great mass of Boomers, who are all hurtling toward their fragile years.

In Peel Region, a couple of bureaucrats decided to take a risk on a care model that promotes, well, love. Now, Kenroy’s unit is shoving aside the old clinical ways, with plans for laughter, friendship, energy, tenderness, freedom and hope. Try collecting data on that, health ministry.

From inside Peel’s year-long experiment in nursing home radicalism, here’s how it all went down.

Before Malton Village brought the Butterfly program to its dementia unit, Inga Cherry used to sit for hours staring out the window. Randy Risling/Toronto Star

Every day Inga Cherry sits for hours at the end of a long hallway in a locked dementia unit and stares at the cars speeding along Mississauga’s Derry Rd.

Watching the traffic makes her feel like it’s the 1970s and she’s sliding onto the red leather seats of her Chevy Vega, silk scarf tied under her chin, driving with her daughter on a Manhattan getaway or north to Algonquin Park.

Inga’s memories tease with freedom past. She clings to those days, still dressing in her black leather pants, clutching a ruby red purse that swells with pocket mirrors, lipstick, pink nail polish and pictures of herself from 1942.

Outside, the early spring sun is warm but Inga doesn’t feel it. She lives in Malton’s Redstone unit, where every day is 22 C, as required by provincial rules.

To read the full article and watch the video, please click on the following link: http://projects.thestar.com/dementia-program/